BETTER TOGETHER – COOPERATIONS IN THE SEA
canlı

Editor’s Note: Oceans are the home of the most of the living. Nearly 1 million identified species live beneath the surface. Survival is the ultimate purpose, and some achieve this goal by “cooperating” with the others. Lara Tek, one of the new members of our club, wrote the first English article of derin about this interesting topic. Enjoy!

Symbiosis – that is the term for two species teaming up and working together. Having developed this kind of relationship, either one or both of the partners’ survival might depend on the other. In the ocean, three different types of symbiosis can be found: mutualism, commensalism and parasitism. The first one, mutualism, can also be referred to as a win-win situation as both of the involved species benefit from the cooperation. Let’s have a look at some examples for mutualistic symbiosis: 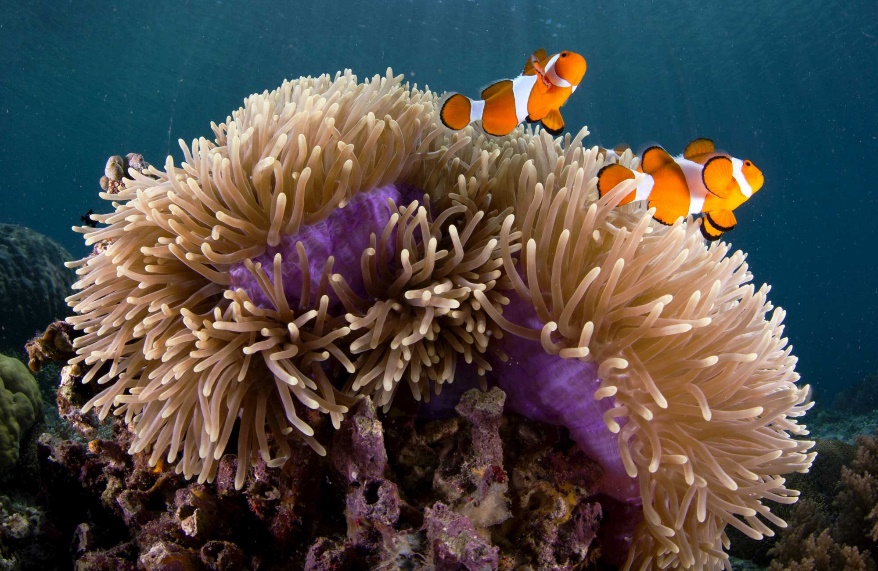 Due to the banging sound it can cause with one of its claws the pistol shrimp counts as the world’s loudest animal. Nevertheless, it is myopic and would not be able to identify an approaching danger in time. That is why it needs to hire a guard to watch its sandy burrow. A symbiotic relationship with the goby comes in handy for that as both species benefit from it. The goby stays at the entrance of the shrimp’s burrow and looks out for possible threats. As soon as an enemy approaches the goby flees into the burrow whereby the shrimp gets alerted as well.

A couple of years ago the rare case of a triple symbiosis was observed at a reef near Indonesia. In this cooperation, a pistol shrimp and a goby shared their burrow with a porcelain crab. As the crab is a suspension feeder, which means that it filters food particles such as phytoplankton from the water, it needs a safe habitat where it is protected from predators. Thus, without this or a similar kind of symbiosis the porcelain crab would not be able to survive. 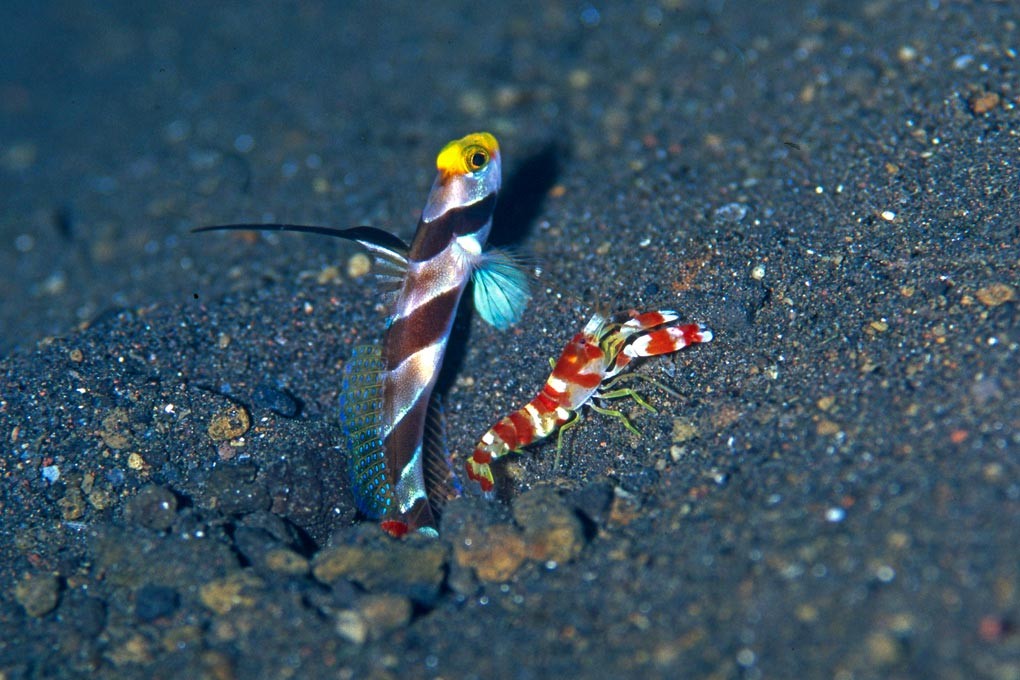 As their appearance suggests, morays are feared predators. This is why other fish, crabs, and octopuses normally go on the run as soon as a moray appears. Only the cleaner shrimp strolls around and inside the moray’s mouth without being eaten, clearing it of parasites and scraps of food. In return, the cleaner shrimp does not only enjoy this source of food but also the given security. 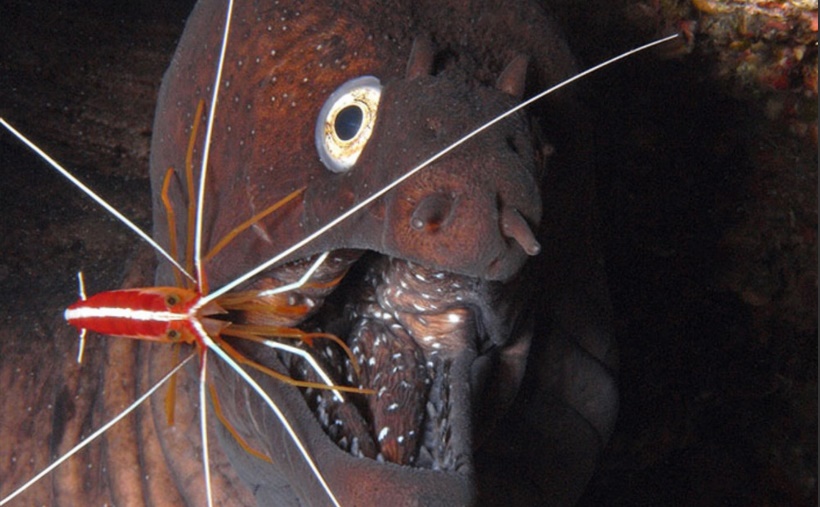 When only one of the cooperating partners in a symbiotic relationship benefits from it but the other is not harmed, it is referred to as “commensalism”. In the sea, there are many examples of smaller species attaching themselves to bigger ones. One of those are barnacles. The small arthropods attach themselves to whales without doing any harm to them. There they stay for their entire life, filtering plankton into their bodies. Therefore, it is important for the barnacles to be carried to different places that are rich in their source of food. As the whales also feed on plankton, they turned out to be an ideal symbiotic partner for the barnacles’ locomotion. Furthermore, the whales provide safety for their cohabitants as they obliquely protect them from being eaten by snails, fish, star fish, or sea worms.

However, not all symbiotic relations are only beneficial. As the term reveals, parasitism means that a species is benefitting from another while harming it. An example for parasitic symbiosis is the isopod parasite, also called tongue-eating louse. As the latter points out, this parasite crawls into the mouth of his victim, destroys its tongue and takes its place. Subsequently, the fish is able to use the louse like his normal tongue. But as the isopod parasite takes the first nip of everything the host is eating, the fish might even be left malnourished.

The aforementioned were just a few of many examples of symbiotic relationships in the sea. They have evolved in an evolutionary way as they bear many important, in most cases even vital, advantages – at least for one of the parties involved.

Sajem, Y. “The Symbiotic Relationship Between a Barnacle Living on a Whale’s Skin”. [online] Available at: https://animals.mom.me/symbiotic-relationship-between-barnacle-living-whales-skin-10968.html [Accessed 5 Apr. 2019]